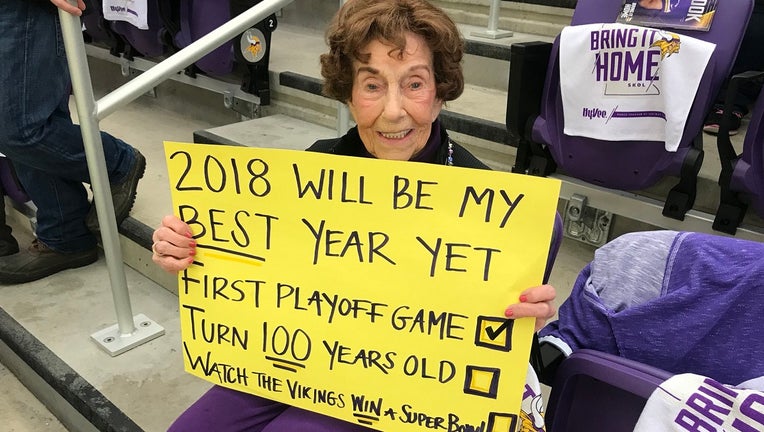 Millie Wall cheering on the Vikings during the 2018 NFC Championship game. (Supplied)

MINNEAPOLIS (FOX 9) – Minnesota Vikings superfan Millie Wall, who captured the hearts of fans across Viking Nation has passed away at 102 years old, according to family members.

Millie rose to fame during the Vikings’ playoff run during the 2017-2018 season that ended in a loss in the NFC Championship game to the eventual Super Bowl LII winners the Philadelphia Eagles.

Millie Wall has been a Vikings fan since the team was founded in 1961.

A longtime fan, Millie told FOX 9 she would spend every Sunday watching the Vikings with a screwdriver drink in one hand and a fake brick in the other, which she would sometimes throw at the TV.

Millie became a good luck charm for the team during the playoff run. The team surprised her with tickets and she got to see her first playoff game, which ended up being the famed “Minneapolis Miracle” with a walk-off touchdown to Stefon Diggs.

While the Vikings didn’t get to bring home a Lombardi trophy, the team still kept close ties with Millie, naming her 2020’s NFL Fan of the Year. In a tweet, the Vikings stated, “Our hearts are broken to hear of the passing of Grandma Millie.”

She’s known around Minnesota as the oldest Vikings fan and biggest superfan. This Independence Day, Millie Wall is ringing in another year as she turns 101 years old.

Millie’s health had been declining in recent months and she passed away at the hospital Thursday afternoon.

Ashley Wall, Millie’s granddaughter, posted a tweet in honor of her grandmother.

“She was a remarkable woman who lived a beautiful life filled with faith, family, kindness, laughter, & love,” Ashley wrote. “She will be so missed by so many & she will never be forgotten.”